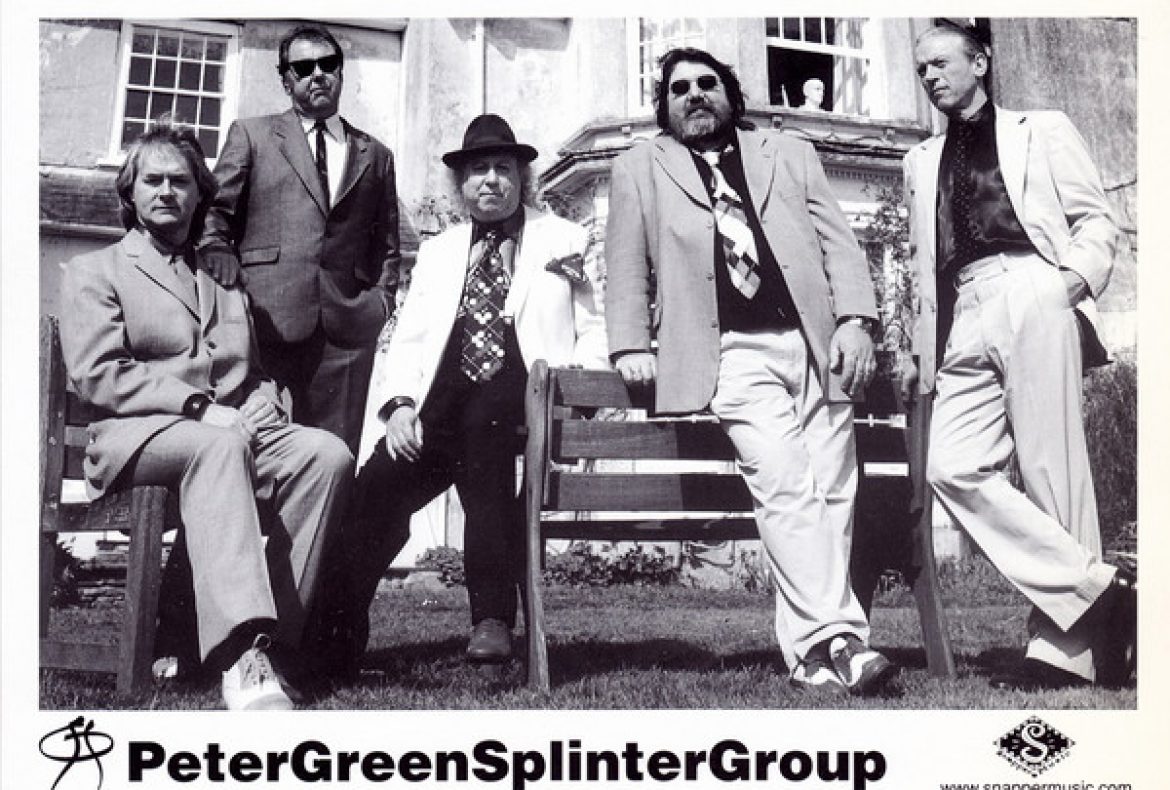 Peter Green’s “second comeback” in 1996, with the Peter Green Splinter Group was spearheaded by Nigel Watson, with whom Green had last collaborated twenty-five years earlier, in 1971.

They went into the studio twice that summer; first in July, with guest Rupert Parker on electric harp (the string instrument, not harmonica) to record a cover of the Hank Marvin instrumental ‘Midnight’, released on “Twang! A Tribute to Hank Marvin and the Shadows”.

And then again in August, covering The Ventures’ ‘Walk Don’t Run’ for a proposed second “Twang!” tribute that never materialized.

In December, Green was one of an eclectic group of British Blues musicians contributing to a Various Artists compilation dedicated to the memory of Cyril Davies and Alexis Korner titled “Knights of the Blues Table”.

Green chose to record three Robert Johnson songs, ‘Traveling Riverside Blues’, ‘From Four Until Late’ and ‘I’m a Steady Rollin’ Man’ alongside Nigel Watson.  Only the first has seen release.

The performance is far from polished and therein lay its charm (at least for me).  It captures the sound of two men playing to entertain themselves, not an imagined audience; this recording might well have been a run through, a way for the two to settle in on how they are going to approach the number, and for the engineers to set their levels.

Watson sings the first verse as the two guitars weave their lines together with Green’s harmonica lowing like a distant locomotive.

Green sings the next verse in a worn, papery voice and Watson sings the third.

Green’s harmonica is featured on the brief break; like his voice, there is an almost threadbare quality to the sound of the harmonica; like seeing a uniform or flag that is faded and frayed, one’s thoughts turn to the trials experienced that left it in such a state, making one grateful that it survived.

After the break, Green takes the fourth verse, the one that Clapton inserted into his cover of Johnson’s ‘Cross Road Blues’.

Watson begins the final verse solo, but Green joins him on the second line.  The final thirty seconds of the number find them searching for an exit, and the two wander in circles for a bit before they just stop playing.  A brief bit of chatter follows and then the tape is cut; the lack of a proper ending (that we hear that is the producer’s choice; the number could have been faded) contributes to the feeling that this was a “rehearsal”.

At the end of December 1996, two Peter Green Splinter Group shows, at Wolverhampton, Cambridge and Shepherds Bush Empire in London, were recorded with tracks pulled from each to create their self-titled debut.  Appended to the live recordings, were another two studio tracks also recorded that month.

Along with Black Ace’s ‘Hitch Hiking Woman’, Green and Watson had another go at ‘Traveling Riverside Blues’

The first thing one notices is that the sound is much cleaner on this recording; each man’s guitar playing is now distinct, the lines shimmering and ringing; part of the reason they sound so clear is that Green does not play harmonica on this version.  Sorely missed, the harmonica’s unpretentious sound seemed to relax both men; their vocals here sounding oddly constrained

The sly sexiness of Johnson’s original recording, and the relaxed pleasure of their first recording of the song has been bleed out of this performance.

The two carefully enunciate the words, but the specificity of the place names, “Friar’s Point”, “Vicksburg”, “Five Points” and “Rosedale” make them sound performative, like actors reciting Shakespeare without truly understanding the meaning of the Elizabethan English words; the pronunciations are correct, but there is no feeling behind them.

Green fumbles the words of the song’s final line as he joins Watson and the number quickly comes to a merciful finish.

The next commercially available performance is a live recording taped at the renowned Ronnie Scott’s in Soho on April 05, 1998.  Originally released as a “limited edition” CD in 1999, it was reissued under the Recall 2cd banner in 2001.

The intimacy of the club (capacity 250), brings a welcome warmth to this performance, the first song of a mini-set of five Robert Johnson songs performed that night, commencing at the half-way point in the eighteen-song set.

In the introduction, Watson mentions that they had been doing the first two “for a while now”, the second song being ‘I’m a Steady Rollin’ Man’ (two of the songs they had recorded back at the end of 1996; the third number, ‘From Four Until Late’ appears on their debut)

What is heartening is that the arrangements are not set in stone; this is the third released version and while they have not radically reworked the number, they have mixed and matched elements from the two previous versions to keep it fresh.

They retain the slightly slower tempo of the second recording, and while Green and Watson perform the number as duet, Green does not sing on this one.

He accompanies Watson on harmonica, the rough-hewn quality of his harp work a tonic to the stiff academic reading of the song on the previous recording.  Green can be heard softly singing the second line of the repeated first verse in harmony with Watson, perhaps to help himself get settled into the number.

Green’s harmonica creates an interesting frisson with Watson’s vocal.  Watson forefronts the humor of the lyrics, while the worn sound of Green’s harp conjures specters around the edges of the tale not hinted at in the lyrics even as he matches Watson’s jaunty guitar.

Unfortunately, they stumble just before the finish line when Green interjects Johnson’s spoken aside, “Let the juice run down my leg, baby” in a cartoonish mumble too close to the mike, shattering the carefully calibrated mood that they had established.

To their credit, both Watson and Green roll on and the number comes to quick, strong finish.

Green, Watson and the Splinter Group had already released their CD “The Robert Johnson Songbook” at the time of the above recording.  But it wouldn’t be until 1999 that they began recording the remainder of Johnson’s catalog for the CD “Hot Foot Powder”.

By that time the Splinter Group had a new rhythm section with Pete Stroud on bass and Larry Tolfree on drums; in addition, it was decided that they would bring in half-a-dozen veteran American blues artists to guest on seven of the songs.

What would become the fourth released performance of ‘Traveling Riverside Blues’ saw the youngest of the Special Guests, Joe Louis Walker (50) and the oldest, David “Honey Boy” Edwards (84) joining the group.

This performance comes closest to capturing the sexiness of Johnson’s original recording.

Watson sings the first line acapella and Edwards’ and Walker’s guitars joins him on the second; by the second verse, Stroud and Tolfree have stepped in and the number takes flight, the tempo coming closer to Johnson’s original.

Watson sounds relaxed, finding the teasing humor in the lyrics; Green’s harmonica is first heard on the break but he plays with previously unheard vigor on the outro.

The outro itself is new.  The other versions all ended rather abruptly, but the extended outro is a welcome addition, allowing the listener to “barrelhouse” just a little longer.

I believe it is Joe Louis Walker who takes the lead on the outro, with Edwards lower down in the mix.

This is for me is the most successful of the four performances.

A Note about the spelling of “Traveling / Travelling” – as so often happens with English, British and American spellings differ; both are correct and I used the spelling found on each release.